Home » Blog » It is Ability, Not Disability That Counts

It is Ability, Not Disability That Counts: What Can We Learn from Paralympians About Overcoming Struggles? 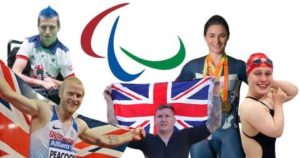 The Paralympics 2020 kicked off in Japan last week (a year later than originally planned) and GB have already had success as Dame Sarah Storey, who was born without a functioning left hand, won our first gold in cycling, taking her overall gold medal tally to fifteen and making her the most successful female British Paralympian in history.

Having overcome bullying and an eating disorder, Sarah started her Paralympian career in the pool at the 1992 Barcelona Paralympics before switching to cycling in 2005.  On her way to her latest gold she broke her own world record too.

Sarah Storey is a Paralympian that has not only overcome personal struggles but has also overcome physical struggles and has always believed that her disability does not detract from her ability to succeed. There is one phrase, a motto, said by Dr Ludwig Guttman that Paralympians worldwide constantly demonstrate – “It is ability, not disability that counts.”

Every Paralympian will tell you that they have overcome struggles to be the best they can be – Mike Kenny, Baroness Tanni Grey-Thompson, Lee Pearson, Dave Roberts, Jonnie Peacock, Ellie Simmonds, Hannah Cockroft, Richard Whitehead, David Weir and Sophie Christiansen, to name but a few.

Whether you were born with your disability or a tragic event that was sudden, unexpected or developed over time has been life-changing, Paralympians have had to overcome their personal struggles as well as the physical struggles that their disability entails.  Every type of disability presents a set of challenges that have to be mastered and managed.

How many times have we sat and watched Paralympians running, cycling, shooting, playing basketball in wheelchairs or any other sport and wondered what we would have done if we had the same disability?  I’ll let you decide, but in the meantime, let’s talk about what we can learn from Paralympians.

Ask any Paralympian – in fact, any athlete – what our young generation need to develop and these five traits will be on the list:

Giving young people an opportunity to develop resilience, to learn to be tough, is giving them the ability to accept setbacks to find a way to adapt and overcome them. The challenge for teachers and parents alike, is that developing resilience means testing yourself, which can be as uncomfortable for the youngster as for the parent alike!

Never give up; when you fall down, get back up; if at first you don’t succeed, try and try again; that’s perseverance.  Disability or not, every athlete will tell you that they have failed more often than they have succeeded.  The learning comes from accepting that you will fail at times but persevering, getting up and trying again, is the willingness to meet and overcome the setbacks.  Paralympians aren’t just dealing with a disability; they often have to persevere through excruciating pain and discomfort, not to mention injuries.

Is it time to stop saying that it’s OK to give up trying?  How many times have we seen youngsters with ability and a disability shrug their shoulders in defeat before they’ve even tried because no-one has encouraged them to give it a go?

Every athlete will tell you about the hours and hours of training they go through daily in their quest to achieve their very best.  Talent and ability alone is not enough; it has to be developed and nurtured to be the best they can be.  Yes, many Paralympians rely on the support of family, friends, coaches and their support network to help them, but every single one of them set out to do as much as they can for themselves.

For Paralympians that have often been told they can’t do what other people do, and don’t even think about taking up sport, their mindset is crucial in doing it anyway.  Paralympian David Blair, born with a club foot, said: “It doesn’t even cross our minds that we maybe shouldn’t be doing this, because of a deformity, or because of any type of handicap that we might have.  It doesn’t necessarily occur to us to do it any other way than to adapt to what we have and go forward.”

Yes, athletes face setbacks, particularly disabled athletes, but accepting what someone else says instead of challenging the adversity takes away the belief that there is so much more they can achieve.  We shouldn’t allow other people’s mindset to dictate our own.

No-one said it was going to be easy; success isn’t easy.  If we continue to ‘dumb down’ what defines success to the point that no-one feels like they have failed or are left out, how can we teach the younger generation to be resilient and committed?  How will they learn to persevere, to get up and try again?  How can we help them develop a mindset that will encourage them to overcome the setbacks and achieve no matter the challenges they will face?

There are many kids that have an inner drive to succeed in spite of their disability and they have the ability to be successful.  Sport has undeniable benefits; it empowers people with disabilities, builds self-confidence, increases fitness and physical ability, improves mood and social awareness.  It has the power to motivate and inspire people to achieve so much more than they thought possible.

As well as resilience, perseverance, commitment and mindset, there’s one other factor that Paralympians can teach our younger generation – if you want it badly enough, if you work hard enough, if you develop a positive mindset, you can succeed.

Sports for Schools is a social enterprise that works with top athletes from around the UK and Ireland, visiting primary schools to inspire and encourage kids of all abilities, and teachers, to be more active. Our mission is to Activate, Educate, Motivate and Innovate schools and parents through a series of events and workshops.  If you’d like your school or parents to get active, get in touch with us and see how we could help you inspire our next generation.